A new documentary on the liberal opposition figure shines a light on his achievements.

Amidst the hundreds of Russia-related headlines saturating the current U.S. media landscape, it was almost inevitable that a small but significant one of them would go almost unnoticed. On May 13, the U.S. Senate came one step closer to renaming the Washington, D.C., street on which the Russian embassy is located after one of the Kremlin’s most vocal critics: the late Boris Nemtsov.

Nemtsov, who once served as Boris Yeltsin’s deputy prime minister and was one of the most important liberal political figures in 1990s Russia, ended his life a steadfast opponent of Vladimir Putin and his authoritarian regime.
On February 27, 2015, he was shot to death by a car full of assassins while walking home across a Moscow bridge mere yards away from the Kremlin. 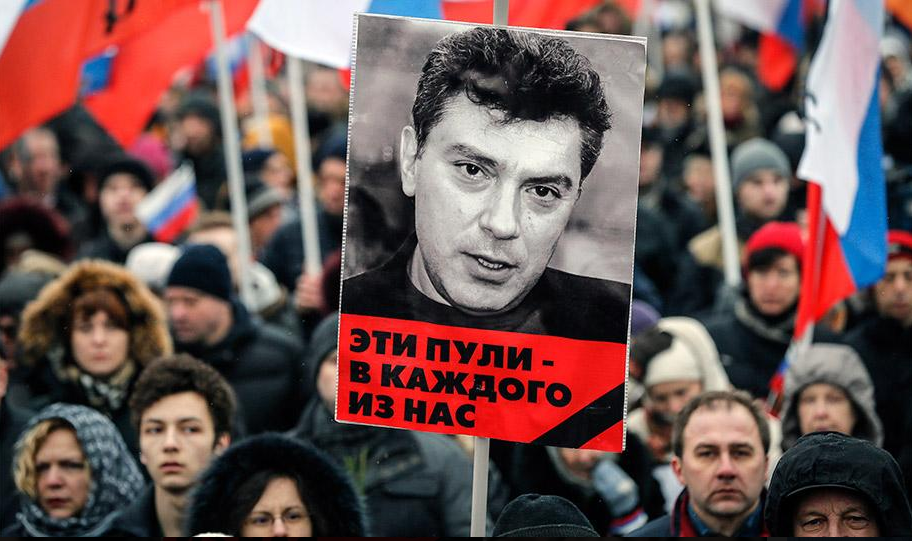 Nemtsov’s life and work is the subject of a new documentary written and directed by Vladimir Kara-Murza, himself a well-known Kremlin critic and former adviser to Nemtsov who worked closely with him in various human-rights- and democracy-promotion efforts. With a running time of just over an hour, the film does an excellent job of deftly laying out Nemtsov’s many achievements, both as one of the principal figures of the Yeltsin era, and later as a key figure in the liberal opposition to the Putin government.

During the perestroika period of the 1980s, a young Nemtsov was pursuing a career as a talented radiophysicist in his home city of Nizhny Novgorod (then called Gorky) with no plans to enter politics.
The construction of an experimental nuclear plant just outside Gorky would change that. The recent Chernobyl disaster underscored the danger of the project, and Nemtsov joined the movement against putting the power station into operation. As part of his efforts, he would even meet with and interview Nobel Peace Prize–winning nuclear physicist and Soviet dissident Andrei Sakharov, who himself opposed the plant’s becoming operational. From there began a political career that would embody the best of the often-troubled Yeltsin era.

After being elected to the first congress of the the People’s Deputies of Russia in 1990, Nemtsov succeeded in changing his home city’s name back to Nizhny Novgorod. He would become known for advocating free enterprise and stressing the importance of private property. Soon thereafter he found himself participating in a meeting of Russian economists led by Grigory Yavlinsky to plan a series of free-market reforms for the economy. The program to grow out of the meeting would be known as the “500 Days,” the period of time over which the reforms were to be implemented.

Not long after the failed coup attempt mounted against Gorbachev and the dissolution of the Soviet Union in 1991, Nemtsov became governor of the Nizhny Novgorod oblast (the equivalent of a state). Under his leadership, Nizhny became known as the capital of reforms in Russia, achieving a uniquely large set of successes amidst an often chaotic and crisis-plagued national economic environment. Nemtsov offered citizens regional bonds to protect their savings from inflation. He simplified regulations on businesses, oversaw the privatization of factories, and pushed an infrastructure development program that saw dozens of new bridges and thousands of miles of road constructed. (In one of those uniquely Russian anecdotes in the film, his deputy governor talks about Nemtsov’s quality-control tests for newly paved roads. If Nemtsov could drive his car two kilometers without a glass of vodka he’d placed on the hood spilling over, the street passed.) The success of his economic agenda even earned Nemtsov and Nizhny Novgorod a visit from Margaret Thatcher in 1992.

Nemtsov’s successes did not go unnoticed by Yeltsin, who had befriended the charismatic young leader in 1990 and saw in him a possible successor to carry on his legacy. When the Russian president brought Nemtsov with him on a state visit to Washington in 1994, he even introduced him to Bill Clinton as the next president of Russia. In a sad historical irony, this introduction took place at the opening of the very embassy building whose street the Senate, led by Marco Rubio, is now proposing to rename.

In March 1997, Nemtsov would move to Moscow to work for Yeltsin’s administration, as first deputy and later deputy prime minister. A presidential poll conducted that year had Nemtsov winning the presidency in a second ballot by double digits. Yet it was not to be. In addition to his personal reservations about assuming the office, Nemtsov’s anti-corruption efforts, which included the first-ever legislation forcing public officials to declare their income and assets, and resistance to bribery attempts by Russia’s so-called oligarchs (it was Nemtsov who popularized the term in Russian) led to a sustained media campaign against him. (Before Russian television was controlled by the state, it was controlled by the oligarchs.) By the end of 1998, Nemtsov had resigned his post in the administration. He would not long after serve as a representative in the State Duma as leader of the liberal Union of Right Forces, where he became increasingly vocal over what he considered the illiberal and authoritarian concentration of power in the Kremlin under Putin. But by the 2003 parliamentary elections, his party had become mired in infighting — in no small part over the question of how much to support the Kremlin — and lacked the votes necessary to maintain a presence in the body. It seemed that Nemtsov’s political career was all but over, and with it any hope of a liberal Russia.

Luckily, F. Scott Fitzgerald’s line about second acts applies only to American lives. Over the course of the 2000s, Nemtsov would reemerge as a noticeably grayed, fashionably dressed street activist and anti-corruption protest leader fighting for change outside official channels. As a cofounder of Russia’s Solidarity movement, Nemtsov helped organize some of the largest protests since the fall of the Soviet Union, including the 2011–2012 rallies in Bolotnaya Square in protest of fraudulent legislative and presidential elections. During this period, Nemtsov often appeared alongside other notable opposition figures, most notably lawyer and anti-corruption blogger Alexei Navalny. Near the end of the film, Navalny cheerfully recalls sharing a small concrete cell block with Nemtsov for a two-week period following one of their arrests. Nemtsov was also instrumental in pushing the U.S. Congress to pass the Magnitsky Act, a 2012 bill that targeted Russian officials responsible for the death of lawyer Sergei Magnitsky. When the Russian government lashed out in response to the law by banning U.S. adoptions of Russian orphans, it was Nemtsov who led the opposition’s response. He remained committed to a free and open Russia to the very end. Indeed, he was planning to lead a march in opposition to Russia’s war in Ukraine just days after he was assassinated.

The film has been a labor of love for Kara Murza, and one that has not been without significant cost.

The film has been a labor of love for Kara Murza, and one that has not been without significant cost. In an e-mail to me, he explained that he began work on the documentary shortly after Nemtsov’s assassination. Following the first interviews he conducted for it in May 2015, he was mysteriously poisoned, leaving him in a coma for weeks. After a months-long recovery, Kara Murza was able to complete the film by fall 2016. A second poisoning followed in February of this year during a screening tour of the documentary in Russian cities. He had presented the film himself to audiences in eleven cities before falling ill and once again miraculously recovered.

Opposing the Putin regime is no small task. Earlier this month, Navalny had a green dye thrown in his face that left him partially blinded in one eye. The attack followed the release of his own documentary film, He’s Not Dimon to You, which alleged that Prime Minister Dmitri Medvedev has secretly amassed billions of dollars’ worth of wealth and properties, including yachts, vineyards, and villas. And though his doctors have told him that he won’t survive a third poisoning, Kara Murza has said he plans on returning to Russia to carry on his work.

Kara-Murza tells me that in every city in which he has screened the documentary, Russian audiences have turned out to view it with interest. He credits the engaged audience response to Nemtsov’s talent for uniting. “I can see that he continues to bring people together even now, and I know that will continue for a long time.”

Perhaps one day it will even be screened at 1 Boris Nemtsov Plaza.